Oosi is a mythological figure first referenced in the ancient kingdom of Uttarakuru, based in the region north of
India that is today commonly known as Kashmir. This story can be dated to somewhere in the 6th century BC. Uttarakuru
is sometimes regarded as a real place and other times regarded as a mythological place, inhabited by otherwordly
beings.

There are many different versions of the story of Oosi found in many different cultures. Some of these stories have
Oosi as a female demigod, while others have Oosi as a bird or lamb. There are others that seem to reference Oosi as
inanimate objects such as a loom or a Shofar. And still others that have referred to Oosi as astronomical objects such
as Ceres or Pluto.

The first known story of Oosi is as follows.

Oosi lived in the valley that lies between what is now known as the Great Himalayas and the Pir Panjal mountain range.
He was a weaver of fabrics and nets for a small fishing community that inhabited the valley. At this point in their  history the Uttarakurus lived side by side, and traded back and forth, with the gods that occupied the Pir Panjal Mountain Range. The gods watched as the population of the valley sunk further and further into sleep and forgetfulness to their true origins and to the realities of the world. Out of fear of losing their wakefulness and having this spread up the mountain into what the gods termed The Pure Lands, they approached Oosi to convince him to help find a solution in separating their populations from one another. Oosi had lost his young daughter, Vajasuyatta, to drowning, weeks prior to being approached. Oosi, being so distraught over his daughter's death, had agreed to the plan of the gods if they would grant his daughter access to The Pure Lands and redeem her from the confines of her untimely death. The gods plan for Oosi was for him to be woven into a veil that the gods would then use to separate mortals from themselves. Oosi would then be used as the sole communicator, having been woven into the fabric of the veil, between the two growingly different lands, The Night Lands and The Pure Lands respectively. In trade for this, Vajasuyatta, would be taken to The Pure Lands to live out her existence until the veil could be removed and open communication could be restored between the gods and mortals. It is believed, according to some historians accounts of early calendar systems, that the veil would be lifted, and Oosi would be liberated, sometime between the year 1997 AD and 2023 AD. At this point it was assumed the gods would descend from  The Pure Lands, and help to wake the mortals from their sleep, as was agreed upon before the veil was set in place. It is believed that at any given moment Oosi is communicating from the gods through the veil to many different types of  creatures throughout the world.

There are references to similar characters in other cultures throughout history. An attempt was made by Raul Quadri
in 1952 to collect some of these transmissions from around the world and create an anthology. There were so many different languages that these writings and references were found in that the translations ended up being so poor that much of the meaning was lost and some of it was seen as gibberish.

Another attempt was made by Susan Bergman & Rene Morault in 2007. It is considered a more concise
and cleaner translated collection of  transmissions. Transmissions : To Pierce a Heart with Terror and Joy was published
on March 22nd 2007, 90 copies were made.. By April it was out of print.

A surname of Lockjaw was given to Oosi by Raul Quadri. There was an image that many in the early 20th century thought
was a visual reference to Oosi. It is of a disembodied head in what appears to be a large piece of fabric with his
mouth sewn open with gold thread. 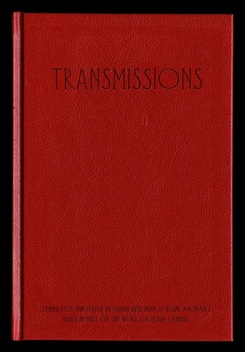 This now, all of the variants that are seen and unseen on a timeline are never ending on the inside.
The only light is now and this is here. Where joy is there is no person, even now. (R.Q.)

Even here, all the plausible and implausible variations of our past and future are tumbling around incessantly,
filling up our innards. The only reprieve being this precious present moment and the well spring of joy that
resides nowhere a personality will ever have access to, even here. (S.B. & R.M.)

Depth is an illusion we create by trouncing around in the shallows, kicking up the silt.

All of the most hated insides to be loved without fail or fault.   (R.Q.)

To court and show unconditional attention to that which one naturally and unintentionally shies away
from internally.     (S.B. & R.M.)

​           Well-founded freedom is shielded in plain view inside both the axe and the quill. Innateness cleaved, an appetite to
expunge the dead enemy in a pitch south of here. Good night to the accustomed anterior. (R.Q.)

Genuine freedom hides in plain sight within the axe and the pen. Our nature torn, longing to erase the enemy slain
in the field to the south. Farewell to the prevailing past. (S.B. & R.M.)

The judgments drawn out. The ill will banished. The hiding hurt finding light and freedom. The unfocused focusing on the
beam of mind. The hopeful swing and the fearful dread giving each other over to themselves
to be ripped apart like a dying rat king.   (S.B. & R.M.)

Grabbing within a fog, at the fog. Men are made of mist.

Not to be mistaken as the most formal, but the everydeath. The day to day letting go, but the ox cart gets stuck.
The under-pinings for something to squeeze, the inability to shake the shakes.
Feed feed feed the good, the natural rut less movement. (S.B. & R.M.)

What reality outside of the unborn? The timeless predecessor of birth, the ever free of death. Pleasure is still pleasure, pain
is still pain. What is not there is something to contain the memories and perspectives. The rider has
evaporated, the ride finds itself infinite. There is no one taking up space, there is still space.. (S.B. & R.M.)

There is an open field with many holes dug throughout. It stinks of all things past, you can smell
each and every event that took place. (R.Q.)

The pastures, the holes in a field where a snake or a haired beast live,
the reminiscent scent of the underlying lack of closure and time stamps. (S.B. & R.M.)

If there is a desire to expel pervasive agony,
shower the past with a lack of desire. (R.Q.)

When longing to quell the restless tide,
drown regret in the want for nothing. (S.B. & R.M.)

The light takes up all the cracks in space. There is fire. (R.Q.)

It isn’t as much the songbird as it is the silence
It’s not the waking up but the going to sleep
That persists
If you can hear it
It is quite deafening
Always looking above and ahead for what is
Always below
It isn’t some mystical vitality that draws you in
But rather, the long black cloak left ringing
In your ear.

*Most of this transmission was illegible when found.*

Destroy the ship to rouse the captain. One from afar calls after us. (R.Q.)

Rend the mast and wake the captain. Someone hails our vessel. (S.B. & R.M.)